And this is the credo in the village. “Ecology and biology is economy with future!”, is the concept of the local tourism association. 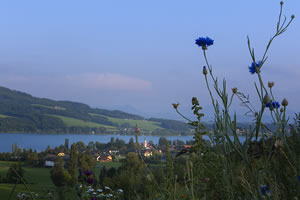 No matter if biomass heating plants, soil-and-climate-alliance-municipality, or ecological and biological farming to protect and look after the cultural scene, maintenance of an intact environment: for healthy products, for healthy food and for the perfect water quality. Those circumstances do not only comfort inhabitants but also visitors. The organic rhythm increases the well-being of those who live or spend their holidays in this wonderful area.

… on the organically kept farms which are “members of the ORGANIC AUSTRIA alliance”. 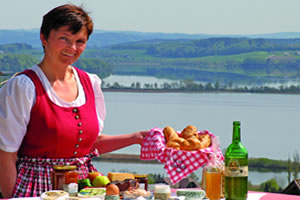 In a double room 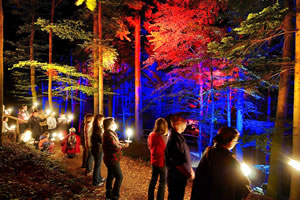 In our municipality more than 80% of the famers produce goods following the organic guide lines; 30% of the guest houses offer organic products.

Since 2005, the annual event of the 'Organic Days' take place in Seeham. A series of events which gives insights into the work-year of organic farming.

In 1996, 13 organic farmers from Berndorf (neighbouring village) and Seeham founded the cooperative ‘Trumer Seenland’ to market their organic hay-milk. In 2001, the project 'Organic-Hay-Region' was launched; it is a cross-border project between Upper Austria and Salzburg. The reason was to promote organic products reaching from apple juice to goat cheese, as well as to make consumers and visitors aware of this environmentally friendly way of economical handling of regional farmers. Members of the 'Organic-Hay-Region' have to obey several rules concerning organic farming, growing plants (crops), animal/cattle keeping, and production and processing. 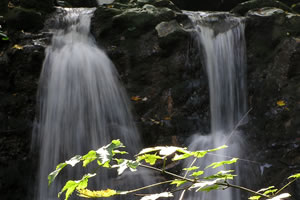 At the opening of the eco-culture-project in the year 2000, citizens of Seeham got to know several winners of the alternative Nobel Prize. Inspired by the talks, Rosenstatter family decided to not only be an organic farm, but also an organic hotel. From that time on, great emphasis was - and still is - put on sustainability, ecology and transparency in the organic-hotel 'Schiessentobel'. 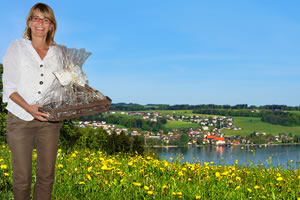 Concept of tourism and image of the future

Together with interested citizens, Seeham’s Tourism Office elaborated a first concept of “Seeham’s hearts beat in the organic-rhythm” in 2004. The concept was about being a model municipality which should able to put into practice the organic topic in a sustainable, ecological, economic and reasonable way. The main focus was on the creation of awareness within the population of Seeham. As a first visible sign the “Seehamer Wasserkrug” (water jug) was established. Because water means life! 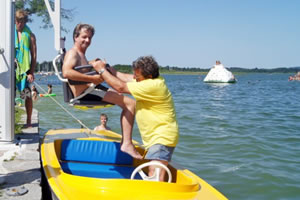 Since bios means life, from farming, tourism, production of foods/groceries, energy, construction of flats, accessibility, leisure up to the quality of life - everything is included in this meaning of life. This basic idea of “BIO” comprises every area of life within the municipality of Seeham.

In the middle of 2011, the new role model of/for the municipality was elaborated. And finally, after half a decade of endeavours, the plan worked out:

Seeham is the first organic-village in Austria and in the 'Organic-Hay-Region' which already tried decades ago to increase the visitor’s and population’s interest for regional organic products. 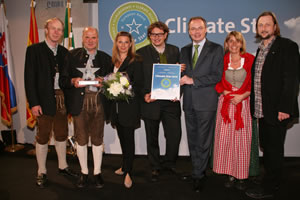 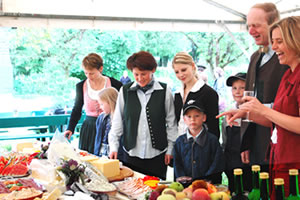 The result of the consistent work is food of high quality and value. Salzburg’s organic breakfast, where only organic products are served, was created in Seeham. It established itself as a brand of quality, which means that it is not only served by organic farms, but also in hotels and guest houses. 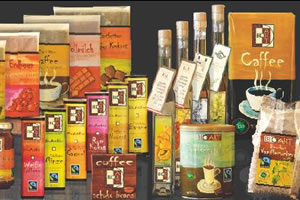 The ‘BioArt’ enterprise, which is in charge for the production of this high-quality breakfast offer, stands for organic-innovations & marketing. On the one hand with their high-grade BioArt (culinary) delight line BIO&FAIR Confectionary Products, on the other hand with their creative product development for the brands of the market. Both take place in a close cooperation with the 'Organic-Hay-Region Trumer Lake District'.